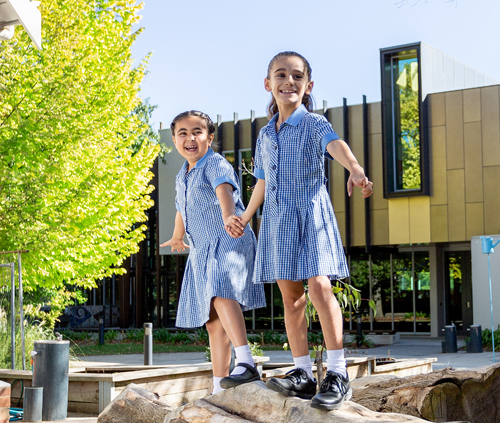 Being our Best Selves

In November last year, the Dunwoody’s welcomed Leo into our family, a miniature golden Groodle.

I adore Leo, not only because I am his favourite (widely acknowledged in our family) but because of what he gives each day. He greets us every morning with excitement (with a look on his face that says – this is the best day ever!), he demands that I stop my work to play ball – finding different ways to make me if I try to dismiss him, he loves walks and he loves it when I try to teach him new things. Leo helps to bring balance to my life at a time when it is difficult to do so. He helps me to try and be my best self.

Today was one of the best days for a number of weeks as our students returned to school after remote learning. We are so pleased to have them back and look forward to helping them re-establish the normal routines and experiences of life over the coming weeks. I want to thank our staff for their dedication and skill in responding to the everchanging demands and to you as parents, for your continued support.

In her role as Deputy Head of Senior School – Student Wellbeing, Kath Woolcock works extensively on our student wellbeing programs, often with Emma Hinchliffe from Junior School. Aware of our aim to help young people flourish, Kath has written an article titled Bored and Brilliant where she highlights this, and I attach it for you along with a summary of the importance of play.

I do hope you have received your electronic invitation to attend the CGGS Centenary Gala at Leonda By The Yarra on Saturday 31 July 2021.  This event will bring members from the entire CGGS community together to celebrate 100 years of our wonderful school. With fine food, beverages and great entertainment, I do hope as current parents, you will get together and join me for a magical night of celebration.

Everybody who buys tickets before the Early Bird special closes will go into a draw to win some great prizes. There will be two lucky winners drawn, so I encourage you to purchase your tickets now. There will also be an exciting announcement made next week, so stay tuned. Full event information can be found by visiting: www.cggs.vic.edu.au/gala  If you have any enquiries, please contact Kate Daffy in our Foundation Office – daffyk@cggs.vic.edu.au.

As we continue to face the challenges of our time, I hope that you all have many ‘Leos’ in your life who help to distil the important things in your day so that every day you can be your best self.

Recently, my nearly 4-year-old daughter sat down next to me on the couch and said, ‘I’m bored’. I didn’t know what or how to respond, and as I sat there contemplating an answer, she promptly jumped up and ran off to set up a tea party with her toy cat.

This exchange got me thinking about boredom and inspired me to do some research about the purpose of boredom and the links between boredom and play. So, where does this idea of boredom come from? What is its purpose and why is it feared so much?

According to an article published by Linda Rodriguez McRobbie for the Smithsonian Magazine, ‘boredom’ first became a word in 1852 with the publication of Charles Dicken’s Bleak House. She goes onto say that, before that, there are examples of Roman philosopher Seneca talking about boredom as a ‘kind of nausea’, while ancient graffiti on Roman walls indicates that the act of defacing property when there is nothing else to do, is an act that has stood the test of time.

The first study of boredom dates back to the 1930s, when psychologist Joseph Ephraim Barmack examined how factory workers coped with the tedious nature of their day – the answer was “stimulants – caffeine, amphetamines, and ephedrine”. Since this study, considerable research has occurred that explores the causes of boredom, the implications of boredom and the benefits of boredom. Ultimately boredom has a purpose, perhaps an evolutionary one, and is it occurs as result of a number of factors including “a situation that is actually boring” and a “predisposition to boredom”. In an evolutionary sense, it is the feeling of being bored and uncomfortable in a situation that can help us to explore or exploit our environment.

What is equally interesting is how we respond to being bored, and it is perhaps no surprise that in this era of instant gratification, that this has changed over time. With so much passive activity in our day, we don’t often get the opportunity to experience ‘real boredom’ and as such we aren’t able to experience the benefits. In fact, adults and teenagers alike do almost everything and anything possible to not be bored, and as such, we have lost some of the benefits that this uncomfortable situation provides us.

One of these benefits of boredom is creativity.  Dr. Sandi Mann designed a study that explored the impact of boredom on finding creative solutions to problems. Effectively, he asked participants to complete twenty minutes of a meaningless task (copying phone numbers out of a book) before devising uses for two paper cups. The test was then repeated with an even more ‘boring’ tasks – reading phone numbers out of a book, followed by another turn at the creative ideas for paper cups. The results proved his hypothesis and highlighted that “people who are bored think more creatively than those that aren’t” (Zomorodi, 2017).

Further scientific benefits of boredom have been noted including letting you know when something is amiss, links to greater goal setting ability and some studies have found a correlation with improved happiness. In saying that, it is also worth noting that boredom can also be linked to higher levels of the stress hormone too as we grapple to sit with the agitation and frustrating of it. Embracing and engaging with boredom takes time and practice.

The links between boredom and play are strong. The Raising Children Network Director, Associate Professor Julie Green, states “”When children are required to find something to do, they’re forced to use their problem-solving skills, creative thinking and imagination to play”. She continues by exploring how we, as parents, and educators, need to hold our nerve, and allow children to sit in the discomfort of being bored so that children have the opportunity to work through it and to find meaningful activities, games and play based opportunities that fit their needs at the time.

Play is in fact, beneficial for people of all ages and while most play-based activities and play based learning is often associated with children of younger ages, we cannot overlook the importance of play for young adults and adults themselves. Play helps people of all ages relieve stress, improve brain function, stimulate the mind and boost creativity, regulate mood and sleep, improve relationships and connections with others and increase energy (Parrot et al., 2020; Starling, 2011). It is has even been suggested that children who were allowed to play in unstructured ways grew up to be adults who could be leaders in life and the workplace (Berman, 2007).

How is play described?

> Play might look challenging as students grabble with concepts, explore equipment or solve problem. It might cause frustration however enjoyment is a key feature.

> Play might be symbolic or pretend, exploring the ‘what if?’ of a situation

> Play might be active and require action, either physical, verbal or mental engagement with materials, people, ideas or the environment

> Play can be voluntary and spontaneous such as recess or lunchtime activities (Shipley, 2008).

> Play might involve using our outdoor equipment at recess or lunchtime

> Play might involve student-directed learning and choice within lessons

> Play might involve problem-based learning experiences, where students are given real world problems to solve

> Play might involve exploration and inquiry-based learning, with hands on experiences and discoveries

> Play. Might involve free time within lessons to explore something that interests them

> Play might be facilitated by co-curricular clubs where students are creating, collaborating, designing, making and exploring areas of passion

At both Junior School and Senior School we provide opportunity for our students to play, to explore, to create, to question, to be active and to problem solve through curriculum, co-curricular activities and the use of physical spaces. We recognise that making time for unstructured play throughout the day enables students’ to effectively engage in their learning (Burriss et al., 2011). Unstructured play at school is undertaken in physical and social spaces and as such, we have invested resources in tese areas. In addition to our existing facilities such as the maker space, oval, gym and courts we have provided new outdoor equipment in Lower Woodstock at the Senior School and also in Junior School for students to play in an unstructured way, enabling them to be agents of their own play, making choices and negotiating rules and behaviours. We have also added a wealth of games and resources to the Library and Year Level areas to support play at the breaks and afterschool.

For children, play is often used in the context of ‘play based learning’, which is where children organise and make sense of their social worlds, as they actively engage with people, objects and representations. This type of learning occurs readily in both our Junior School and Senior School as we recognise the benefits of providing students of all ages with the opportunity to play, explore, negotiate, take risks and create meaning. While the context may be different, the premise is the same, that is, quality play experiences assist in the development of memory skills, language, behaviour regulation which leads to enhanced school adjustment and academic learning (Bodrova et al., 2005).

And so, as we come off the back of the Term One holidays and move into the next phase of structure and routine both at home and at school, it is worth remembering that time that is less rigid has its benefits. Being bored is not a bad thing, in fact, it provides a range of possibilities and opportunities for young people, and older people, to play and ultimately to learn.

Smithsonian Magazine, McRobbie, L. (2012). The History of Boredom – You’ve never been so interested in being bored. https://www.smithsonianmag.com/science-nature/the-history-of-boredom-138176427/

Starling, P. E. (2011). An investigation of unstructured play in nature and its effect on children’s self-efficacy,Doctorate in Social Work (DSW) Disserations.