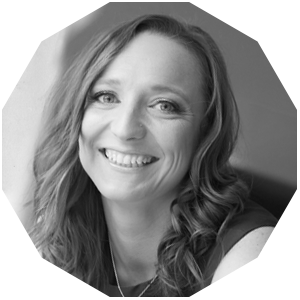 Following school, Georgie completed Commerce (Sport Management) and Arts (History) undergraduate degrees at Deakin University, before pursuing a career in the sport industry. Over the next 20 years, Georgie worked at the Melbourne Football Club, Hockey Australia and Football Victoria, where she oversaw the establishment of the Melbourne Victory women’s team in the W-League.

Georgie then spent eight seasons as Commercial Operations Manager for the AFL Players’ Association. During this period, Georgie completed both a Master of Business (Marketing) at RMIT and a Master of Management (Sport Management) at La Trobe University. Parallel to her career in sports management, Georgie became a passionate advocate for ovarian cancer awareness and a prolific fundraiser for the Ovarian Cancer Research Foundation (OCRF), following her mum, Mandy’s diagnosis with the disease in 2006.

Combining her love of sport with her philanthropic pursuits, Georgie established Mands’ Mob, a team of fun-runners who participated annually in Run Melbourne, raising funds for the OCRF to support their quest to find an early detection test. In 2009, its first year, the team had just nine runners but grew to more than 100 Mobsters five years later. Adding sportsman’s nights, auctions, raffles and trivia events to raise further funds and awareness, The Mob raised more than $500,000 before being retired following Mandy’s death in early 2017.

With her mum’s passing, Georgie’s desire to see ovarian cancer survivability increase through early detection only grew stronger, so she combined forces with Channel Nine Sports Presenter, Clint Stanaway to establish the Silver Lining Ride. The inaugural Ride saw Georgie pedal from Adelaide to Melbourne, a total of 1068km with a group of mates in late 2017. Georgie has led a team of cyclists each year since and over four years, the Ride has banked more than $400,000 in donations for ovarian cancer research and generated over $1.5 million worth of publicity.

Through the establishment of the Silver Lining Ride, Georgie became close to the dedicated team of staff at the OCRF and in late 2020, Georgie joined the OCRF as Philanthropy and Corporate Partnerships Manager to continue her philanthropic work.

Georgie is a huge advocate for Ovarian Cancer research and prevention.