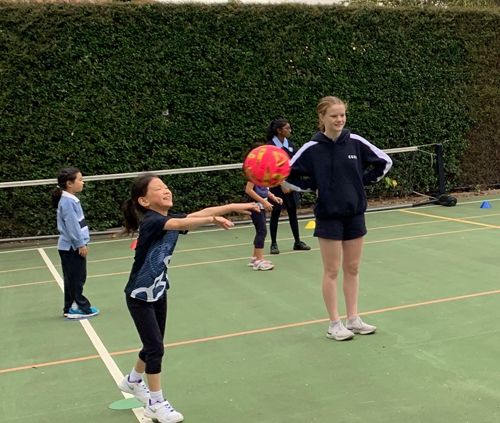 Last week, Anika Selvaratnam from Year 5 competed at the State Primary Cross Country Championships at Bundoora Park. Throughout her previous cross country races at District, Division and Regional levels, Anika was very consistent with her running and had come in first place in each event. At the State Primary Championships, the competition was much tougher, however she ran a Personal Best coming in fourth place and competing against the best runners from across Victoria!

We are all very proud and excited for Anika and we wish her all the best for when she competes at the National Cross Country Championships in Wollongong, New South Wales from the 24 – 26 August.

The Early Learning children participate in a number of experiences that develop their capacity and confidence to use language in all its forms and actively engage with and share the enjoyment of language and texts in a range of ways.

Mark Carthew is an award winning Australian children’s author, poet, musician and educator. He is well known for his books celebrating language, humour and wordplay. During their weekly Library sessions and within the Early Learning classroom, the children have engaged with books written by Mark Carthew, in particular, The Gobbling, The Great Zoo Hullabaloo, A Stormy Night and The Big Sneeze. This week the Early Learning children walked to the Senior School Library and met Mark Carthew and listened to him tell these stories through images, puppets and songs. The children demonstrated much enthusiasm and were active participants as they responded to his chants, copied his actions, joined in the singing and discovered how his experiences and interests influence what he includes in his picture story books.

On Monday 22 July, Year 5 went to Balwyn Cinema for a very exciting excursion! We went to watch the film “2040” for our inquiry topic and question which is “How can we make informed choices as consumers to create a more sustainable world?” We decided to go on this thrilling excursion because 2040 is a documentary made by Damon Gameau that describes and predicts what the future could be like and how we can try to make life on Earth sustainable.

2040 was a very uplifting and inspiring documentary about the different solutions that already exist which could help solve some of the environmental and sustainability problems we have. One solution was taking the carbon emissions in the atmosphere and using it to make the soil healthier so we can grow crops. Another invention they investigated was solar panel microgrids that already exist in Bangladesh and help people to use energy more efficiently in a cost effective way. It was overall a fantastic film that taught us about our effect on the environment and gave us hope for the future ahead of us.

We are very excited to start exploring what changes we can make to create a more sustainable world!

Below are some reflections from two students who attended the excursion.

Last Friday, the Year 6s went on an informative excursion to the Victorian Parliament House, as well as the Old Treasury Building. It was extremely fun and educational, especially being able to hold our own debate in Parliament!

In Parliament, we visited both rooms, the Legislative Assembly and Legislative Council. The building itself was not only sophisticated and refined, but had visible accents of gold as well! We found out this was because Victoria was very wealthy near the end of the gold rush and this was when Parliament House was built.

We were led through the Old Treasury Building by two magnificent tour guides and learnt lots about the gold rush and how the building came to be. We found out the Old Treasury Building was first built to store gold, and that the Governor of Victoria, Linda Dessau, works there! We went through areas enclosed with double doors (for privacy) and old living rooms, reliving the Victorian gold rush experience and learning more about our country.

This excursion was a fun and meaningful experience for all of us, and we even got to say hello to the Google Street View car. See you next time, Parliament!

On Friday 19 July, the Year 6s had an excursion to the Victorian Parliament and Treasury Building. We learnt that the House of Representatives, also known as the Lower House or the People’s House consists of different representatives and a group called the Executive. In the Federal Parliament, the Liberal Party are the executive. This means that the Federal House of Representatives is mainly Liberal members. The Labor Party is called the Opposition. The Labor Party received the second most votes in the election and Bill Shorten was the Leader of the Opposition, until he resigned, therefore The Labor Party has to select a new leader.

The Senate, also known as the Upper House, they receive what is called a Bill, which is an idea for a new law. Once the House of Representatives has given approval, it is then sent to the Senate. This takes place in the Federal Parliament and all of the State Parliaments. If the Bill is approved by the Senate, it is then passed to the Executive. If the Bill is approved, it goes onto the Judiciary, from there it goes to the Governor-General, who is the Queen’s representative. The Governor-General ensures all parties have approved the Bill and once they sign it off, it then officially becomes a Law.

The next part of our excursion was The Treasury Building. The building was used to store gold from the gold rush, so no one could steal it. This was a very interesting part of our excursion. Our guide  told us how Melbourne has changed from the gold rush days. We sat in the room where the Executive Council and the Governor-General meet. We had a look at different rooms in the building as well, such as the apartment of the caretaker’s family.

Overall, this was an interesting learning experience and I had a great time.

On Friday, the Music Department was honoured to host Melbourne-born internationally-renowned violinist, Anne Harvey-Nagl, for a day at CGGS. Anne is currently based in Vienna and has achieved much success as a performer in Europe. She has played with the Radio Symphony Orchestra Vienna, the Vienna Mozart Orchestra, Vienna Concert-Verein, Klangforum, Music On Line, and the Kammerphilharmonie. From 1999 – 2011 Anne was Principal 1stviolin of the Vienna Volksoper and was appointed Concertmaster in 2011.

Years 3 – 5 Strings students were treated to an inspiring and extremely engaging lunchtime recital from Anne, who played many pieces, from Kreisler to Mozart. Students were extremely interested to hear Anne talk about her musical experiences, as well as some insights about both violin and musical performance technique. Many Music staff members were involved in the day’s sessions and special thanks goes to Nichole Adams and Rohan Mack who were instrumental in securing this opportunity for our students. Anne visits Australia regularly and always performs when she is here.

Term 3 is well underway with students returning to their school routines. For many students coming back to school requires a reset of sleeping patterns to accommodate school, rather than holiday hours. It is recommended that children aged between five and eight years have ten to eleven hours of sleep a night, with teenagers needing nine to ten hours to function at their best (Raising Children, 2019; Treyvaud, Vowles, 2018).

Whilst each family’s schedule is different, our nightly routines often include at least some time either watching TV or using a computer or mobile device, all of which emit blue light. It is widely recognised that this blue light suppresses melatonin levels. Lower melatonin levels disrupt the body’s circadian rhythms, i.e. the body’s biological clock, which in turn delays sleep and has a negative impact on your sleep quality.

One simple step is to make use of Apple’s Night Shift or the Night Mode function for Android devices as these both reduce blue light exposure. An even more important strategy is to turn off mobile devices, computers and the TV at least one hour before bedtime. You may already be doing this, but if this isn’t the case, a conversation with your children / teenagers about the merits of quality sleep on wellbeing, and how to manage their night-time device usage, could be worthwhile. Refer to the Raising Children website for more advice on good sleep hygiene from newborns through to teenage years.

The previous article in this Digital Wellbeing series mentioned our intention to survey the CGGS community as part of our digital wellbeing initiative. This work has begun with all Senior and Junior teachers completing individual and team surveys. We will be asking for your assistance in upcoming weeks as we conduct surveys of our families and students. Survey trends will be shared with the community in future articles. The focus of our next article in this series, is the digital wellbeing of primary aged children, so make sure you look out for it in the next CamNews.

Netball has re-commenced for Term 3, the Years 2 and 3 Netball Skills Program continues to run every Thursday afternoon and the students are enjoying learning many skills whilst having fun playing games.

The Years 4 to 6 teams competed in the Boroondara Netball Association Competition last weekend. The Year 4 Garnets came out strong in their game, they were more consistent than the opposition and shot some fantastic goals. Garnets defeated MA Butterflies 6 – 2. The Year 4 Rubies faced tough opposition but the CGGS team were still able to gain possession of the ball.

The Year 5 Opals were unstoppable against CSNC Blitz, the defensive pressure down the court caused many turnovers that were converted into goals, the CGGS team won 14 – 5. The Year 5 Jets were down at half time 0 – 5, Jets came out strong in the second half, took the lead and defeated KD Starbursts 8 – 6. Both Year 5 teams played their best game of the season and all should be very proud of their determination and efforts.

The Year 6 Topaz had tough opposition last Saturday, the team trained well this week and will come out strong next round.

Congratulations goes to all CGGS Netballers.

I wish all Ormiston families a restful weekend. I look forward to seeing everyone on Monday.