When talking with Ormiston parents and other parents at enrolment interviews, one question that is asked frequently is, ‘What does the Junior School do about transition to Year 7?’ My answer to this question is very simple. Transition starts for those girls that start their educational journey with us in Early Learning 3, or when a student starts at Ormiston for the first time. Even at the Early Learning 3 level, students have the opportunity to visit Senior School and of course at other year levels, our students visit Senior School on a weekly basis through participating in a range of specialist subjects and activities that involve Senior School students and staff. An important part of being an Ormiston student is to understand and demonstrate our School Values not only at Junior School but Senior School as well. Currently our Year 6 students are involved in specific school activities in preparing for their transition into Year 7 next year and this involves meeting and welcoming new girls from outside Primary Schools. Each year our Ormiston girls show outstanding leadership skills in making these girls feel welcome and settled when coming to Camberwell Girls Grammar School in 2017. I wish our Year 6 students all the best during this very exciting time.

I would like to remind all families that our biannual Ormiston Alive! Show is not too far away. All students from Foundation to Year 6 are involved in the Show and are required to participate on both nights. Specific details have been communicated to all Ormiston families and I encourage all parents to organise their tickets as soon as possible as tickets are being snapped up very quickly.

The excitement is building as all girls at Junior School work towards the opening night of Trouble! We have been revising the lyrics of songs, rehearsing dance steps and learning dialogue in an effort to entertain and dazzle the audiences for 25-26 August. Each class has an item to present as we try and convince Mr E, the villain in our story, that girls can learn and do things in lots of interesting ways.  Audiences will also be surprised to see our guest performers in a very new light. The next two weeks will be extra busy as we move our rehearsals over in to Barbara Sutton Hall in preparation for opening night. The excitement is palpable in the air as everyone at Junior School unleashes their inner Diva.
~ Kath Buckingham, Year 5 Class Teacher & Ormiston Alive! Writer, Director and Producer

On Monday 1 August the Year 2 students were treated to stunning performances that explored different cultures in the form of dance. The students also had opportunities to dress up and move enthusiastically to the music made famous by Bollywood, as well as understanding dances that are significant to cultures in the Middle East and South America. Given that we are exploring different cultures and celebrating our differences, whilst also embracing what it is that we have in common, these interactive dance sessions enabled children to learn about other people in a fun, engaging manner.
~ Craig Goodwin and Melissa Thomassen, Year 2 Class Teachers

Last term, Year 6 students spent a number of weeks exploring persuasive texts, closely analysing advertisements and commercials for specific persuasive devices used, as well as creating their own to suit a range of purposes. This investigation culminated in our class debates where teams from 6C and 6G went head-to-head in battle. Our top three debaters across both classes were then selected to represent Camberwell Girls in the Years 5-6 Virtual Debating Competition, which includes 14 participating schools around Australia. These girls were Annaliese Le (Year 6C), Happy Wen (Year 6C) and Liesel Trichardt (Year 6G).

On Thursday this week, Happy, Liesel and Annaliese faced off against a New South Wales school called Tara Anglican School for Girls in the ThinkTank over at Senior School, with the rest of Year 6 watching on in anticipation over at the Junior School Video Conference Suite. The debate topic was ‘Schools should block YouTube’, with our Camberwell Girls team being assigned the negative position. Our girls were given a week to prepare before the actual debate, using some class time each day to source definitions and examples, carefully construct arguments and potential rebuttal points as well as rehearse in front of one another.

The way that these three girls conducted themselves during the debate was incredible to watch. They were composed throughout and used expression, tone and pace to emphasise their arguments, continuing to persuade their audience and the adjudicator. They supported each argument with a range of examples and their case line – ‘Do you really want to block another resource?’ – was seamlessly embedded throughout, uniting all three speakers in their position. At the end of the debate, the adjudicator mentioned the high quality of this particular debate, where all competitors across both schools showed excellent manner. It came down to the matter, or the content of the debate, with our team bringing home a win, with an extremely close margin of one point!

We are incredibly proud of Happy, Liesel and Annaliese and congratulate them on their performance so far, as well as their strong teamwork skills. These three girls know how to utilise the strengths they bring to the role and assist one another to ensure each speaker performs at their personal best. We look forward to watching them represent Camberwell Girls in the quarterfinal round taking place in October.
~ Katrina Cheong, Year 6C Class Teacher

On Tuesday 2 August, the weather gods were kind and Ormiston students in Years 3-6 were able to head out to the Doncaster Athletics Track to compete in running and field events. All students had a red hot go and some personal best efforts were achieved. Congratulations to everyone who participated and displayed so much enthusiasm and determination on the day.

Schofield house was triumphant in the Years 3-6 carnival.

On Tuesday 9 August, we held a carnival for the Foundation to Year 2 students in the grounds at Senior School. It was a day of huge smiles, superb effort and lots of ribbons! A carnival atmosphere was apparent. Staff, Year 6 students and a large supportive crew of families assisted in making the day feel like we had our own Rio Carnival at Camberwell Girls. Thank you to all junior school staff for your support and assistance on each day.

Lawrence house was triumphant for the Foundation – Year 2 Athletics Carnival.

The overall points for the two carnivals were:

Literacy is more than knowing letters and reading words. The ability to communicate, involves speaking, listening, reading, writing, viewing and being critical thinkers. During the week, Kate Giles and myself were involved in a Conversation with families titled More than ABC. It was interesting and informative to engage in dialogue with parents and listen to and discuss similar perspectives and challenges related to literacy. This informal conversation time provided opportunities for parents to ask questions, seek clarification and build on their current knowledge. We look forward to our next Conversation titled More than 123 on Tuesday 23 August from 9.15-10.00am.
~ Angela Follacchio, Early Learning Team Leader

Year 6 Excursion to the Immigration Museum

Whether it be recent or so far back that it has been forgotten, under dire circumstances or of free will, all of our families have somehow ended up in the great nation of Australia that we call home. Home. A word with several meanings, yet one that fits so perfectly in its entirety is that of a simple phrase that many are taught at a young age. ‘Home is where the heart is’ is a common saying numerous people know and utter. The Year 6 students became conscious of its true implications during their excursion to The Immigration Museum. They now know the real impact it had upon those who genuinely knew what the saying was attempting to convey. People, no matter where they came from, or what they had done in their previous years, gave little shards of their hearts to those who they hold close. Those people are their home, and most people who immigrated to Australia, journeyed with a loved one and found their way to our nation. So, in a round-about way, Australia is where their heart is, making it their home.

The Immigration Museum had six exhibitions, all of which everyone had the opportunity to visit. Students were grouped with specific adults, but otherwise free to wander and observe the various displays. The students were able to experience what the travel conditions were like for people coming by boat in three different eras, giving every student a brief taste of how torturous the journey must have been for some,. An exhibit which fascinated the girls was the display room entitled ‘Customs’. The students were able to take part in a number of interactive displays, yet the most popular of them was a display that let you interview hopeful people and families who had supposedly applied to enter Australia. There were three time periods to choose from and from there, four groups of people to pick. Once an interviewee had been decided, an interview would be conducted, with you observing, leaving you to rate the people and families in several categories, and then to make a final decision; whether to allow them to enter Australia. Though this was by far the display that intrigued the bulk of the girls, the exhibit that awakened them, in a sense, was the ‘Leaving’ exhibit, which had a looped video for the students to watch. Why did it make the biggest impression? Well, there is a saying, ‘A picture is worth a thousand words’, and the exhibit proved this saying. The impact that the videos had on the girls was drastic. The students were exclaiming how horrendous and sad the pictures were, and actually viewing the destruction and carnage in other countries made the girls more genuinely aware of the hardships refugees and immigrants faced, and still face. Even while leaving the exhibit, the girls were still discussing the awful experiences that some people had to endure, and other students were in awe of the people who were strong enough to keep their heads, and make it through such rough times.

As humans, we spend our lives searching for answers to our questions, no matter how big, small, important or insignificant they may be, because, by nature, we are curious. We even wish for answers from questions we are yet to ask. The Year 6 students found answers, of sorts. However, they learnt one thing that was not written down. One thing that can only be understood with time. The Year 6 students learnt that it was loved ones that kept immigrants going. They learnt that, whether it be recent or so far back, or things that had been forgotten, under dire circumstances or free will, home is truly where the heart is.
~ Liesel Trichardt Year 6G

I hope all our families have a restful weekend. 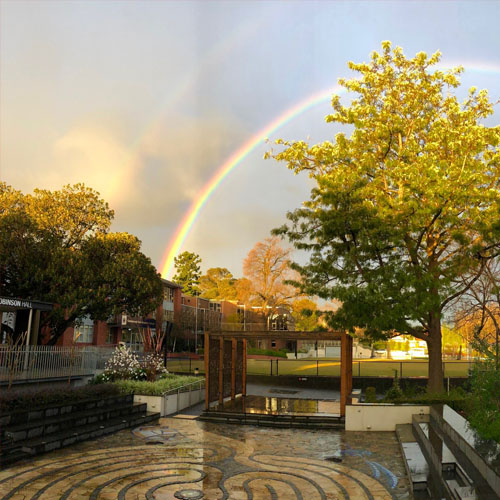 Mrs Dunwoody encourages families to take time to read her email from this morning. 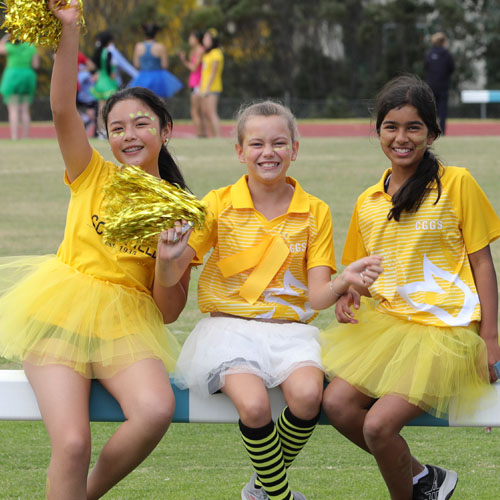 A lot happened at Senior School over the past fortnight, fantastic swimming & diving results, House Athletics & students participating in Upskill… BY DESIGN, plus much more! 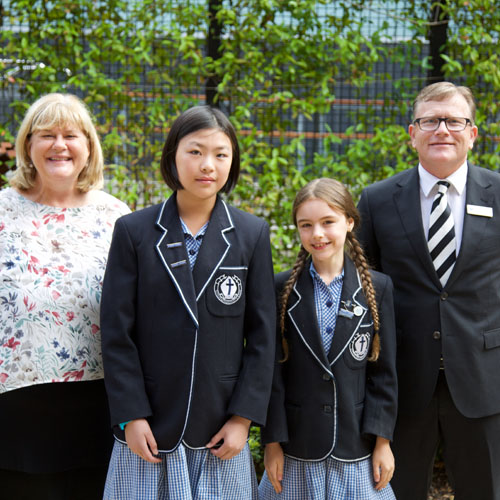 A very busy fortnight at Ormiston with fantastic swimming results & the induction of the Semester 1 School Leaders. 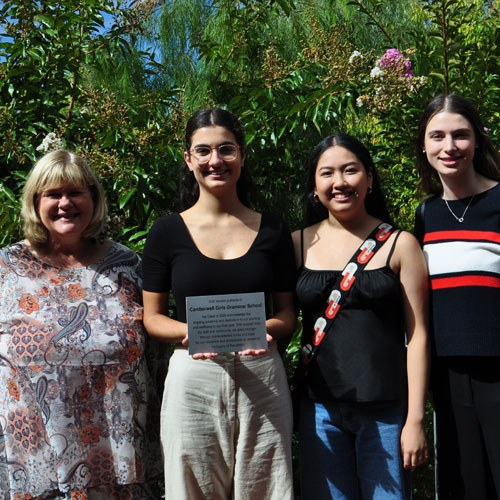 The PFA is thrilled to be welcoming parents back to CGGS with multiple upcoming events & Mrs Dunwoody received a lovely gift from the Class of 2020 last week.