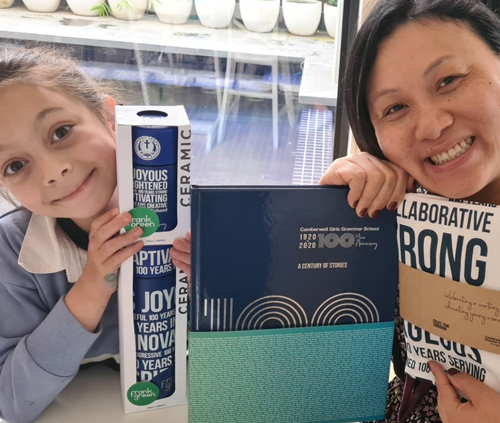 Are you a Lucky Ticket winner??

The Parents and Friends Association is excited to have launched the PFA Community Raffle to celebrate our wonderful CGGS Community.

Your daughter was given a PFA boxed chocolate bar to bring home as a gift from the PFA. Inside could be a Winning Lucky Ticket.

There will be winners from every year level from Early Learning to Year 12 and Professional Services, Junior and Senior Staff groups.

Be sure to check inside your gift to see if you have won!!

Some lucky winners have already been identified and have won either:

If you are a lucky winner, be sure to email a photo of yourself holding the winning ticket to Susannah Jepson – jepsons@cggs.vic.edu.au

The PFA looks forward to reconnecting with the CGGS community and celebrating the lucky winners of the Community Raffle.

Year 9 enjoyed a Service Learning conference which focused on the value of being Useful in Service and connecting with the local community.

The school invited old grammarians who volunteer and serve the local community to present via video to the Year 9s about their work and contribution to the communities they serve.

The students were very fortunate to hear from:

Amanda and her 13-year-old son Nick founded Koala Kids in 2005 with a mission that Koala Kids volunteers provide small things that make a difference for children and young people, their families and healthcare team during cancer treatment. As well as working tirelessly to provide moments of happiness for children and young people from birth to 25 years Amanda also manages Koala Kids’ large army of volunteers committed to its vision to touch every child and young person with cancer in Victoria and Tasmania

In the 2021 Australia Day Awards, Amanda was awarded the Medal of the Order of Australia for her service to the community through charitable organisations. Amanda spoke with such passion about bringing moments of happiness and joy to these families undergoing treatment.

Helen Parker OAM (1996), Founder and CEO of the Babes Project
Helen Parker established the Babes Project in 2019, after being confronted with her own experience of crisis pregnancy.  The Babes Project is changing the way Australians approach crisis pregnancy by supporting and encouraging women on their journey no matter the circumstances.  Helen shares her passion of ensuring every woman in Australia has access to help and support during pregnancy. She was awarded a Medal of the Order of Australia for her service to pregnant women in need.

Diane Dick (1965)
Diane  spoke about her time volunteering in her local community where she first began volunteering on the Mornington Peninsula at a Neighbourhood House. Utilising her professional skills, she developed software to assist in the administrative running of the Neighbourhood House to allow the volunteers to focus on delivering eduational programs. Diane has moved to Perth and now offers her time in assisting a Dog Rescue organisation. She is a great example of someone using her skills to volunteer and serve.

Andrea Brown (1984)
Andrea Brown started her volunteer career after leaving school by ushering at the theatre for the Royal South Street Calisthenics Society. Andrea has always had a passion for calisthenics since the age of six and she is currently the Chair of the Calisthenics Discipline and Deputy Chair of the Royal South Street Society. She is a great example of someone who serves in an area where she can use her passion and continue to serve the community she loves.

Elisabeth Sandbach (2012)
A strong advocate for volunteering whilst at school, Elisabeth continued on volunteering at university where she gave her time to VGen, a youth movement of World Vision Australia. VGen’s goal is to inspire, educate and empower young people about worldwide issues of social injustice and poverty. Elisabeth currently volunteers for The Sudanese Australian Integrated Learning (SAIL) Program, a completely volunteer-run, not-for-profit, secular organisation which provides free tutoring and educational support to the Sudanese Australian community. Elisabeth works as a commercial lawyer and is the pro bono Coordinator for the  firm which has a strong commitment to pro bono work such as homeless law and refugee legal.

It was wonderful to see the way she continued to employ the CGGS motto of being Useful in Service after leaving school and use her professional skills in service once she became a lawyer.

Georgie Herbert (1998), Ovarian Cancer Research Foundation
After the death of her mother in 2017, Georgie commenced her journey in philanthropy to raise funds for ovarian cancer research. Georgie has worked tirelessly to raise funds and has personally raised over $400,000. After working many years at the AFL as Head of Commercial Operations, she joined the Ovarian Cancer Research Fund as Philanthropy and Corporate Partnerships Manager, continuing her philanthropic work. Georgie told the students her story of volunteering in sports clubs and the evolution of her service which has eventually become her full-time work.

CGGS recognises and appreciates the contribution parents make to the school and the friendships and connections that are formed whilst their daughters are at school. We are excited to announce that we will be launching a Past Parent Community group in 2022.

The purpose of the group is to continue the connections made throughout their daughter’s time at the school. We will be inviting current Year 12 parents who are leaving the school to be the inaugural members of this group. Please stay tuned for your invitation to assist in creating a wonderful past parent community group.

It will be a fantastic opportunity for you to maintain connections and network within the CGGS community.

Thank You to our Volunteers

We are very appreciative of the wonderful culture of volunteering within our CGGS community. In 2020 and 2021, we have not had many opportunities to meet in person; the Parents & Friends Association and Year Level representatives have endeavored to maintain contact and keeping our communities connected.

To thank our amazing volunteers, we enjoyed a virtual cheese and wine tasting where we tasted amazing cheeses from local producer That’s Amore Cheese and travelled to Italy to meet the wine makers from Salatin Winery in Veneto. The evening was bellisimo!