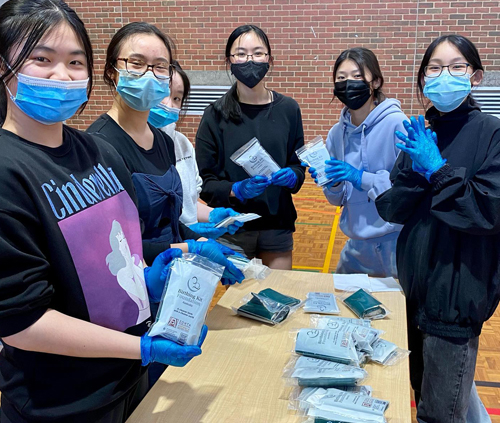 In our Remembrance Day Assembly on Tuesday, I had the honour of speaking to the Senior School students about the significance of the minute’s silence we observe on the 11th of November, as we remember all the service people who have lost their lives in various wars.

At the time of the First World War (1914 – 1918) Australia was a newly federated country. Three of every five Australians who signed up to serve in the military were either killed or wounded and the social effects of these losses on our country and its people lasted for many decades afterwards.

The Australian soldiers had a fighting reputation out of proportion to their numbers. In the four years of the First World War more than 330,000 Australians served overseas, and more than 60,000 of them died.

On November 11, 1918, the guns at the Western Front fell silent after four years of continuous fighting. The Allied armies which included the brave Australian soldiers, had successfully driven the German army back from France and Belgium, causing the German government to call for an armistice or suspension of fighting to enable peace negotiations.

And so, each year on the eleventh day of the eleventh month at 11am the time when fighting ceased in the First World War, we observe a minute’s silence to remember, honour and mourn those who made the ultimate sacrifice. In doing so, we ensure that we will never forget the more than 100,000 Australians who have lost their lives in various wars, then and since, for the sake of our country, our people and our freedoms.

On Remembrance Day we traditionally wear a poppy. Red poppies were among the first plants and signs of life on the battlefields of Belgium and France. In soldiers’ folklore, the vivid red of the poppy came from the blood of their fallen comrades. It has become a symbol of remembering everyone who has given their life in war.

Last week, Mrs Daffy recorded an interview with Melbourne author Mike Rosel, who researched the life of a local Hawthorn boy who volunteered to fight in WW1. Mike, who has written several books about Australian military history was inspired by his father’s gentle refusal to explain exactly how he won a Military Cross at Tobruk in 1941. When Mike stumbled on the astonishing yet virtually unknown story of Captain Alexander (Alec) Little, a young Hawthorn man credited with shooting down 47 aircraft in World War I, he researched his brief life as a tribute to all Australians who volunteered to serve their country.

In ‘The Unknown Warrior’, Mike explores the life of a Captain Alec Little, who at the age of 19 paid his own way to the United Kingdom to join the Royal Flying Corps. Over his career, Captain Robert Alexander Little was credited with downing 47 aircraft over three years, before his death in combat in May 1918. He was just 22 years old and left behind his new wife Vera and an infant son. He is ranked eighth of all British Commonwealth flying aces in World War I. Mike felt that Captain Little and his colleagues who served in foreign units deserved more recognition.

This year, young historians from CGGS have entered a range of competitions where they have investigated, interpreted and evaluated people, societies and events from the past. We would like to celebrate and share some of the outstanding work by our young historians in 2021.

The HTAV Historical Fiction Competition encourages students to show historical empathy, by exploring history from the perspective of a person with different beliefs and values, and to show off their creative writing skills. Madeleine Giagoudakis (10B) won the Year 9/10 prize in this year’s competition. Building on what she learned at CGGS back in Year 8 History, she wrote a journal of medieval doctor attempting to understand and treat the Black Death in 1349.

The National History Challenge is a research-based competition open to students across Australia. This year, students were challenged to explore a topic of their choice and link it to the theme of ‘Significance: History Matters’. Amy Aw (8B) won the Year 8 Young Historian Gold Award (Victorian state winner) in the National History Challenge. She used archival sources from the National Archives of Australia to help her creatively explore how Australians experienced the Great Depression. Katherine Mason (9B) won the Year 9 Young Historian Silver Award (Victorian runner up) in the National History Challenge. She wrote an outstanding essay that argued Australians should shift their focus on our past from well-studied conflicts like Gallipoli to forgotten conflicts like the Frontier Wars between indigenous Australians and European pastoralists encroaching on their land throughout the 19th century.

> Maya Jones (11A) documented how the media uses gendered tropes to attack female politicians in Australia, with a focus on Prime Minister Julia Gillard

> Nonie McLean (8D) investigated the significance of the 1969 Moon Landing

> Olive Clohesy (8A) prepared a video on the significance of pioneering female Australian activist and politician, Edith Cowan

We congratulate these students on their awards and commend all young historians at Camberwell who have entered History competitions in 2021. Below are three student entries.

On Wednesday this week, the eight parties contesting the 2021 CGGS Election launched their campaigns in a bid to secure the votes of the CGGS ‘electorate’ on this year’s Election Day, Thursday 25 November.

Each Year 9 Commerce class is represented by two parties and each has developed their own ‘party platform’ and set of policies, a suite of advertising to support getting their message out to the electorate and a website to promote, inform and persuade voters. Links to the websites created by each party can be found below. They are well worth a look as the creativity and passion demonstrated by our students for the issues that they believe will make positive changes for us in the future are front and center in their work.

All students were involved in the campaign process in a way that suited their interests and skills, and each will be involved on Election Day as part of the official process of voting preferentially using a secret ballot. The two weeks leading up to the Election will be spent by the students lining up preference deals and informing voters about the differences between the parties so that on Election Day voters have a clear idea of who and what they’re voting for. The Year 9 Commerce teaching team will be on the lookout for branch stacking! Good luck to all Parties!

The Duke of Edinburgh’s Award is an internationally recognised award with participants from over 130 countries. Over 8 million young people have participated worldwide. The award is open to anyone ages 14-24 in 3 different levels, Bronze, Silver and Gold. The program creates opportunities for young people to develop skills, get physically active, give service and experience adventure. The aim is to build valuable skills that will equip young people for life and work by committing to achieve goals over an extended period of time and reflecting upon the tasks used to achieve these goals. In coming CamNews releases, we would like to share with the CGGS community the achievements of past participants and how they have reflected upon their completion of the GOLD AWARD.

Was there anyone important to you in your DOE journey?
The most important and influential people that I encountered during my DOE journey are the people that I met during my time in Cambodia. All the people at the Green Gecko project had such an optimistic outlook on life and carried an infectious smile every day. The time I got to spend with the Green Gecko project has and will continue to shape the way I interact with others and my community.

How would you improve your experience if you did it again?
My journey with DOE was definitely a highly memorable one. However, if I were to improve my experience, I would widen the range of places and activities which I participated in. Doing this would have allowed me to meet more people and explore new things and places.

What would you tell someone just starting or thinking about starting DOE?
Don’t be scared to push yourself and try something new. Starting DOE can be daunting and at times overwhelming as it seems like a massive task but if you take it slow and one step at a time it turns into an amazing journey. DOE is about pushing yourself, widening your experiences and refining your perspectives. The more you venture out of your comfort zone the more you will grow and learn.

On Monday 8 November, the Year 10’s were given the opportunity to support a life-saving initiative. We used Periods 5 and 6 to make Zonta Birthing Kits. The Zonta Birthing Kits program is one of the school’s longest-running service learning initiatives, having first started at CGGS around 20 years ago. Through the program, students and teachers made over 100 birthing kits in an afternoon. Each kit includes a soap bar, gloves, a plastic sheet, string, gauze, and a sterile scalpel. Despite being an absolute necessity for childbirth, many women in developing countries struggle to afford these kits which results in dangerous and life-threatening childbirths. Through Zonta, however, the kits that were made by CGGS are given to women for free, allowing more women to experience a safer birth. The afternoon was very eye opening and highlighted to all of us how incredibly challenging it is for women around the world to access the mere essentials of healthcare. It also gave us a greater appreciation for the incredible efforts that Zonta are putting towards women’s health.

To think that by putting some gloves on and folding some gauze and scalpels in some plastic and packing them (and then unpacking and repacking them all when we accidentally left out a scalpel in one of the kits) has saved 100 mothers and their newborns is truly astounding. All Year 10’s are definitely feeling grateful for having had such a privilege to be involved in the initiative.

Did you know that 130 million girls around the world are out of school? And in Sierra Leone, a girl is more likely to be married before the age of 18, than she is to finish high school. For the past month we have been raising money for an organisation called One Girl. One Girl supports the education of girls around the world, specifically in Sierra Leone. As an organisation they also promote health and menstrual hygiene.

To raise money for this cause, we held a raffle with prizes from local cafes such as The Good Food Collective and Xocolatl. As of Tuesday 9 November 2021, we have raised over $2000. We would like to say a huge thank you to everyone who has donated. Every little bit counts, and we really are making a difference to someone’s life.

Donating $25 can pay for a year’s worth of menstrual hygiene products. $50 can pay for 5 pairs of school shoes for a student in the One Girl program, and $100 can pay for a year of business training for a young woman. We have raised enough money to pay for 20 people to complete a year of training in business, or enough to purchase a year’s supply of sanitary products for 80 women. When you educate a girl, her income will increase by 10-25% for every year that she stays in school, and this will contribute to breaking the cycle of poverty.

We are making a difference in the lives of so many, so thank you so much for your generous donations.

Isabella Wood and Bella Fary, 9B

We are so pleased to be back and playing Netball! CGGS Netball players were back on the court for their first training session this term. It was wonderful to see all of the students having fun, showing off their Netball skills and working hard.

Thank you to all of the students and coaches for attending training, we look forward to seeing you all every Monday for more Netball skills and fun.