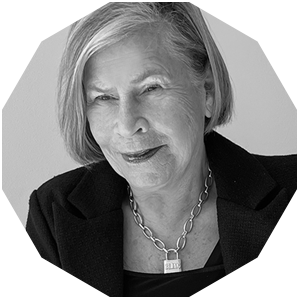 Margaret Porritt is an iconic fashion influencer with almost 50 years in the fashion retail industry.

Growing up, Margaret admired the talents of her mother who was a milliner and she developed an appreciation for aesthetics and design from a young age. After working in the United Kingdom for Norman Hartnell, former dressmaker to the Queen, Margaret undertook a millinery apprenticeship with her mother. Married at 20, Margaret had three boys by the age of 26. She also proudly worked in a small boutique in the west end of Melbourne called The Orange Poodle.

After 12 years, Margaret’s marriage ended. On receiving her settlement, she used it as a deposit to purchase an investment property. In addition, she also put a deposit on The Orange Poodle, where she continued to work hard whilst raising the three boys on her own. The goodwill generated paid off this investment over the first two years and, within three months of purchasing the store she opened a second store in the west end of Melbourne.

FEATHERS Boutique has grown to become one of Melbourne’s most iconic fashion brands – with 15 retail stores, a thriving online store and MYER concessions Australia wide. FEATHERS has over 40 valued employees who Margaret treats like family, with many staff members having been in the company for over 20 years.

FEATHERS focusses on offering generations of Australian women the opportunity to wear quality, on-trend designer styles at an affordable price. Margaret credits the brand’s success to three main elements – her team, the quality of the fabrics and manufacturing, and the ability to rapidly turn around product from design-phase to shop floor.

Margaret Porritt and FEATHERS has seen itself through a global financial crisis, a recession and now a global pandemic. The brand has survived because Margaret is an eternal survivor who delights in a challenge. Margaret attributes the success of FEATHERS to its ability to adapt to change. The brand never stands still, it is constantly evolving and reinventing itself.

In 2022, FEATHERS will celebrate its 50th birthday.

Margaret is a self-made business women, who has run the same thriving business for over 50 years!