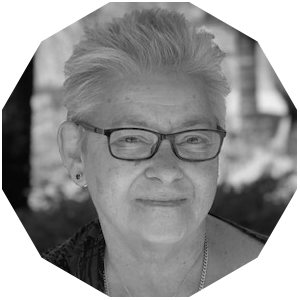 Pamela Hore commenced work as a secretary to a firm of accountants in 1959. Based on her knowledge of accounting learned at CGGS, courtesy of her teacher, Mrs Cecile Eunice Storey (Benjamin), Pamela participated in Company Share and Taxation Audits. Later, she worked in the family shoe making business, until its closure in May 1988, achieving a 100% recovery of all debts owed to the company. Front and centre of mind during Pamela’s working life were Cecile’s words, “good administration is the base of all good business”.

Employment at the Local Government Aged Care Department followed. Initially cleaning houses, before being invited to organise the delivery of home care services through rostering and matching staff with clients. Pamela ended her career 16 years later as an Intake Officer. During this time, Pamela was called to advocate for her godmother who became a victim of elder abuse.

In mid-2004, Pamela volunteered at the Victorian arm of Alzheimer’s Australia, assisting on the help line. In addition, she participated in the education of fifth year medical students to enhance their understanding of dementia. Pamela represented the organisation at Local, State and Federal Government meetings to improve the safety of those living with dementia. To this day, Pamela continues advocacy work with Dementia Australia, often based on what she learnt caring for her loved ones impacted by dementia.

In 2006, the Victorian Boer War Memorial Committee required a Minute Secretary and Pamela filled the role for a ten-year period. Her work with the Boer War Committee assisted in the raising of funds to have permanent recognition of Australia’s Boer War soldiers placed on ANZAC Parade in Canberra, with the commissioning of a memorial dedicated to their memory.

Pamela also volunteers with Eastern Health, carrying out work as a consumer representative. She has inspired the next generation of doctors to be more empathetic with the families of their patients who are suffering with dementia-related illnesses. Through her own medical experiences, Pamela has assisted Eastern Health in seeking continuous improvement in their systems and protocols which will ultimately benefit the many patients they treat.

Pamela’s personal passion is researching and writing about the lives of her family members who came before.

Pamela has been a passionate advocate and volunteer for multiple causes her whole life.