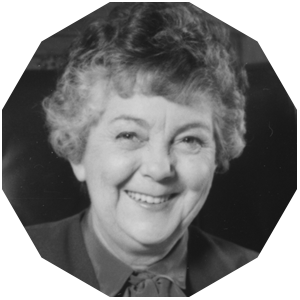 Joan Child first came into prominence in Australian politics following the death of her husband, leaving her with five young sons to raise and care for. She took on menial tasks that gave her time to take the younger ones to school and to be home for them after school.

Joan joined the Australian Labor Party (ALP) in 1967, partly for companionship but also to help workers whose conditions, were very basic and arbitrary. She stood for the Federal seat of Henty in 1972 and marginally failed to beat the incumbent by just 300 votes. She won the seat in 1974, when nobody but her local branch members gave her any hope. Labor had never won the seat since its creation in 1912. She worked tirelessly in her electorate for the benefit of her constituents.

She lost the seat in 1975 in the landslide against Gough Whitlam but continued to work in the community, as well as for Clyde Holding and Dr Jim Cairns. She was also the Executive Officer of the State Colleges of the Victoria Staff Association. Joan was very passionate about two things – education and the advancement of women. She won back the seat of Henty in 1980, was active in caucus and parliamentary committees and was confirmed as the first female Speaker of the House of Representatives in 1985.

Joan presided as Speaker with dignity but what is less well known was that, as Presiding Officer, she had to administer five parliamentary offices. She oversaw the massive and complicated move from the old Parliament House to the New Parliament House. She was also

Permanent Parliament Delegate to the European Parliament and spent a lot of her time attending meetings overseas representing the Australian Government.

Joan retired in 1990, but was still active in her branch activities, as a prolific fundraiser and continually giving strategic and tactical advice to a number of Labor candidates. In 1990 Joan was appointed an AO (Office of the Order of Australia) an honour that recognises Australian citizens and other persons for achievement or meritorious service. She was a passionate gardener, knitter, horse racing enthusiast, Scrabble player, ardent test cricket follower, one time sponsor and long time supporter of the Hawthorn Football Club and a terrific cook. Joan died peacefully at home in 2013, aged 91.

In 1985 Joan was confirmed as the first ever female Speaker of the House of Representatives.