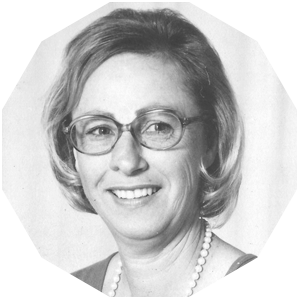 As a teacher, lobbyist and internationalist, Cecile Storey championed women’s equality and human rights though her many roles.

One of only five female students completing a Commerce Degree at Melbourne University in the mid 1950s, Cecile discovered that becoming a female stockbroker was unheard of. So, she turned to teaching – first at CGGS from 1958-1961 and later at Strathcona for over 20 years. Cecile taught generations of girls the principles of government, commerce and the law.

After her three children reached school age, Cecile’s frustrations with the barriers for women led her to do more. She joined the Victorian Association of Teachers in Independent Schools, where she lobbied for equal pay and maternity leave, and was President for two years. Later she developed curriculum for Year 12 students, including units on Women in Local Government and Politics. She was also a Year 12 examiner.

Seeing that more work needed to be done, Cecile became an active member of the Family Planning Association, ensuring that women had access to reproductive advice. She was also President from 1981-1983. Cecile lobbied for the introduction of the 1977 Victorian Equal Opportunity Act and she served on the Victorian Premier’s Committee for Equal Opportunity from 1975-1977. She was the voice for women on the Australian Government’s Committee on Discrimination from 1974-1982.
Strongly committed to human rights, Cecile joined the United Nations Association of Australia, serving terms as State and Federal President, promoting the work of UNICEF and UNESCO, and attending international conferences, including the four World Conferences on Women.

Cecile had a long association with La Trobe University. She was a Council Member for 12 years and Chair of the Housing and Buildings Committees. She was also Deputy Chancellor from 1981-1985.

Cecile’s work was recognised with the award of an AM in 1984, and posthumous induction into the 2004 Victorian Honour Roll of Women. When she died in 1997, latecomers to her funeral service had to stand, a testament to how many lives Cecile had impressed by her commitment to improve the lives of others.

Mrs Storey was a revered and much loved teacher at CGGS.